Here you can find the most current information for all LEA elections.

LEA has several exciting opportunities for you to become a leader in your professional organization.  Please consider running as a candidate in the 2020 LEA Elections. Please note that the VEA Board Seat requires a different petition than the LEA Board positions. The LEA President position requires both petitions be completed. Be sure you are using the correct petition(s) for the desired position.

1.      Campaigning
a.      Distribution of literature and restrictions.
·         One piece of campaign literature must be sent to the Elections Chair at the LEA Office prior to distribution. Please allow 5 workdays for review.
·         LEA will provide one set of labels preprinted with name of the Primary Association Representative worksite, and member count. Materials will be sent to Association Representatives from the LEA Office via the courier.
·         School Supplies may not be used.
b.      Representative Assembly
·         Distribution of materials is allowed
·         Each Candidate for President, Vice President, Secretary, and Treasurer will be allowed up to a three-minute speech at the Representative Assembly. Every other candidate for office will be allowed to make a two-minute speech. The time for the speech shall begin when the candidate begins speaking. Candidates in uncontested elections who choose to speak will do so after all other candidates for two minutes.
c.       Candidates will be given equal campaign opportunities to participate in all events.
d.      Candidates are entitled to have observers present at the tally of the ballots.  Candidates should submit the name of their observer in writing to the Association President prior to election day.
e.      Ballots will be tallied according to the Election Schedule.
f.        The election results will be announced according to the Election Schedule.

All candidates must submit the following:
*The LEA President will also hold a VEA Board Seat. Candidates running for LEA President must complete both LEA and VEA petitions.

All petitions and biographies must be received in the LEA office by
4:30 PM on Monday, January 6, 2020.
Please contact the LEA Office with questions. 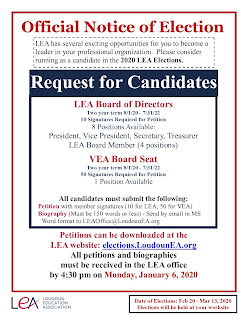 Ballots for the VEA and NEA Convention Delegates have all been sent out. All completed ballots must be received by the LEA Office no later than 4:30 PM December 6th to be considered valid. It is recommended that ballots be sent via the pony no later than December 2nd to reach the office before the deadline. Ballots may also be mailed via USPS or dropped off at the office in person before the deadline to be considered valid. 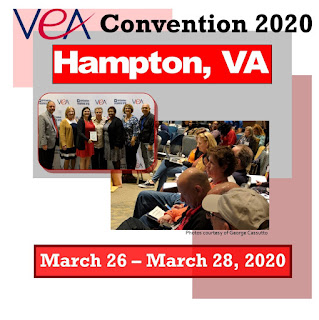 The 2020 VEA Convention will be in Hampton, VA from March 26 - March 28, 2020. In order to attend, an LEA member must be voted into one of the delegate seats allotted to our association by VEA. The LEA was allotted 115 delegates at the 2019 VEA Convention. 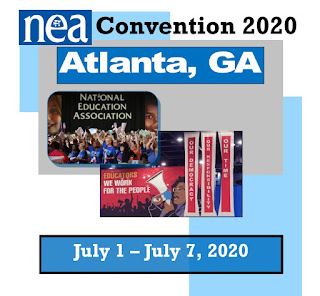 The 2020 NEA Convention will be in Atlanta, GA from July 1 - July 7, 2020. In order to attend, an LEA member must be voted into one of the delegate seats allotted to our association by NEA. The LEA was allotted 22 delegates at the 2019 NEA Convention.

VEA and NEA Convention Delegate
Official Notice of Election
Date of Elections: November 20 - December 2, 2019
Elections will be held at your worksite.

To register to run for the position of Delegate to either of these conventions, please fill out the corresponding forms here: VEA Convention and NEA Convention. All members who complete one or both of these forms by November 11, 2019 will appear on the ballot for the convention designated on the form. You must be elected in order to attend. These forms have now been closed. If you would like to attend the convention, you will need to run as a Write-In candidate.